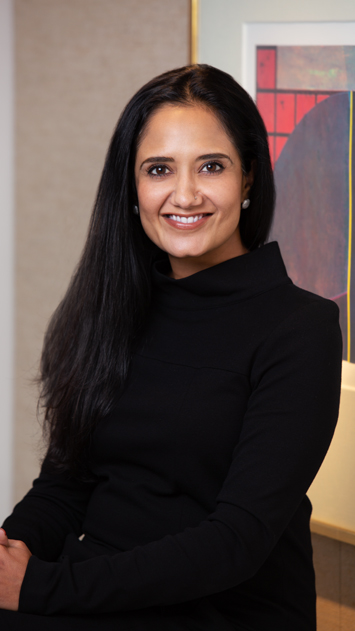 Ayesha Najam focuses her practice on complex commercial litigation, with a more recent focus on disputes involving energy and construction.  With over a decade of litigation experience, Ayesha’s client base has spanned a swath of industries, including energy, manufacturing, health care, software, construction, and commercial real estate.

Following law school, Ayesha was a law clerk to Judge Stephen H. Glickman, District of Columbia Court of Appeals, from 2004 to 2005.

US Pipeline, Inc. v. Northern Natural Gas Company
Represented U.S. Pipeline in lawsuit regarding pipeline construction in Omaha, Nebraska. Tried case to the bench for approximately one and a half weeks and obtained judgment in favor of U.S. Pipeline. Argued appeal to Nebraska Supreme Court, who affirmed the judgment.

In Re: Estate of John M. O’Quinn, Deceased
Represented John M. O’Quinn Foundation, the sole beneficiary under the will of the late, legendary trial lawyer John O’Quinn, in dispute with Darla Lexington, O’Quinn’s companion who claimed to have been his common law wife.  The case settled on the eve of trial.

In re Guardianship of Lenny C. Katz: Jerold B. Katz v. Gross, et al.
GC Services Limited Partnership, et al. v. Gross
Represented individual in related actions involving allegations of malfeasances as trustee of several large trusts and as officer of two privately held companies. All claims against the client were either dismissed at summary judgment stage or pursuant to a settlement agreement (entered into on the eve of trial) under which the client paid nothing.

Kay Dobbs, as Trustee on behalf of The Jeffrey P. Dobbs Irrevocable Trust, et al. v. American International Group, Inc., et al.
Represented life insurance beneficiaries in suit against insurer to recover $25 million in benefits owed, which had been denied under suicide exclusion. Weeks before trial, the parties entered into a settlement agreement.

Speaker: “Your Honor, May It Please The Court…”: Working in the Area That Best Suits Your Interests, National Association of Muslim Lawyers Annual Conference, April 2006, Washington, DC