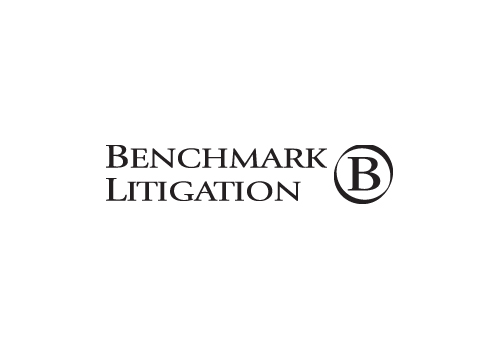 As a special supplement to the 2015 directory, Benchmark compiled its inaugural “Top 100 Trial Lawyers in America” list to which Gibbs & Bruns partners Robin Gibbs, Kathy Patrick and Barrett Reasoner are named.

Gibbs & Bruns has had what many agree is an extremely successful year with major victories in the mortgage-backed securities arena for teams of institutional investors seeking reimbursement from Bank of America, JP Morgan, and Citigroup.  Over the past three years, the firm has secured a series of well-publicized and favorable settlements with each bank, valued at $8.5, $4.5, and $1.1 billion, respectively.  The powerhouse Houston boutique firm was founded in 1983 to attend to clients’ high-stakes commercial litigation needs.  Today, it employs more than 30 attorneys, 66% of which have first-chair trial experience.

Kathy Patrick has received overwhelming ovation for her work as lead counsel for the 22 institutional investors whose $8.5 billion settlement was officially approved at the end of January 2014.  Patrick, who was interviewed and featured in the Top 10 list of this year’s Top 250 Women in Litigation, is called a “superwoman” by peers who marvel at her repeat successes in mortgage-backed securities cases in addition to the waves she has made with a newly filed $800 million LIBOR suit for Fannie Mae against nine of the world’s largest banks.  Patrick is widely revered by peers who champion her ability to “come up with methods of actual viable claims that an attain recovery for people who have holdings in these failed mortgage bonds.”  They continue, “Nobody else has been able to come up with this; that is why these enormously complex cases are so big and so important.”

Scott Humphries, the firm’s managing partner, represents plaintiffs and defendants, largely in securities-related matters and contract disputes.  He has worked with Patrick on the mortgage-backed securities cases, including the ResCap case for which initial cash distributions to the trusts of several hundreds of millions of dollars took place shortly before the end of 2013.

Barrett Reasoner’s practice covers oil and gas, legal and professional malpractice, construction, securities, and intellectual property.  In early 2013, he worked on a trial on behalf of Jim Crane, the owner of the Houston Astros, in an auction-rate securities case against JP Morgan.  Two days into trial, the case was settled on terms favorable to Crane. In April, Reasoner and firm co-founder Robin Gibbs entered judgment of just north of $6 million on behalf of client SourceGas Distribution in a natural gas purchasing dispute.  Peers declare, “Robin Gibbs is renowned across Texas.”

Future stars Sydney Ballesteros and Aundrea Gulley teamed up with Mark Giugliano to represent Keeneland Capital Management in a shareholder derivative suit involving its investment in an energy corporation, settling the case favorably for a confidential amount.

The 14 Gibbs & Bruns lawyers highlighted in Benchmark’s 2015 directory include:

The complete list of the firm’s Benchmark Litigation rankings can be viewed here.