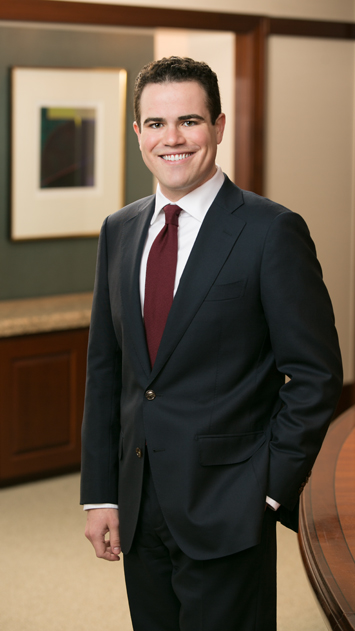 Following law school, Justin was a law clerk to Judge Jerry Smith, United States Court of Appeals for the Fifth Circuit, 2015-2016; and Judge Lee Rosenthal, Chief Judge of the United States District Court for the Southern District of Texas, 2016-2017.

Confidential Oil-and-Gas Arbitration
Represented a Fortune 500 exploration-and-production company as the Respondent in a successful take-nothing defense of a confidential arbitration.  The Claimant alleged our client, the Respondent, had breached an acreage dedication agreement, and sought more than $1 billion in damages.  Justin successfully briefed and argued multiple motions in the course of pre-hearing litigation and took key fact and expert depositions.  At the ten-day final hearing, Justin cross-examined the Claimant’s damages expert and presented Respondents’ damages expert.  The arbitration panel issued a unanimous take-nothing judgment in favor of our client.

Winter Storm Uri Force Majeure Litigation
Represented or representing multiple major natural gas production and marketing firms, including Occidental Petroleum and Pioneer Natural Resources, in federal, state, and arbitral forums in disputes stemming from the February 2021 winter storm.  Many of these matters were resolved on agreeable terms prior to or in the early phases of litigation.  Others remain ongoing.

In re Dealer Management Systems Antitrust Litigation (Northern District of Illinois)
Representing The Reynolds and Reynolds Company in defense of antitrust claims consolidated in the Northern District of Illinois and in Reynolds’s prosecution of counterclaims under the Copyright Act, Digital Millennium Copyright Act, Computer Fraud and Abuse Act, and state law against the lead plaintiff.  Justin took key fact and expert witness depositions; was the lead writer on multiple dispositive motions; and argued several summary judgment and Daubert motions in the MDL court.  Some cases are ongoing; others have settled on confidential terms.

Anadarko Holding Company and Big Island Trona Company v. NRP Trona, LLC and NRP (Operating), LLC (157th Judicial District, Harris County, Texas)
Represented two subsidiaries of Natural Resource Partners, LP, as defendants in successful take-nothing trial defense of a breach of contract suit in which two plaintiff Anadarko affiliates sought in excess of $75 million.  Justin took and defended key fact and expert depositions and was the lead writer on NRP’s summary judgment briefing and motions to exclude expert testimony.  During trial, Justin cross-examined Anadarko’s damages expert, argued a successful motion to exclude a key portion of Anadarko’s liability expert’s proposed testimony, and presented the outside transactional lawyer who negotiated the disputed contract for NRP.  Justin was the lead writer on NRP’s post-trial brief and proposed findings and conclusions.  The Court issued a final take-nothing judgment in favor of NRP, holding both that NRP had not breached the contract and, in the alternative, that NRP had established multiple complete affirmative defenses.