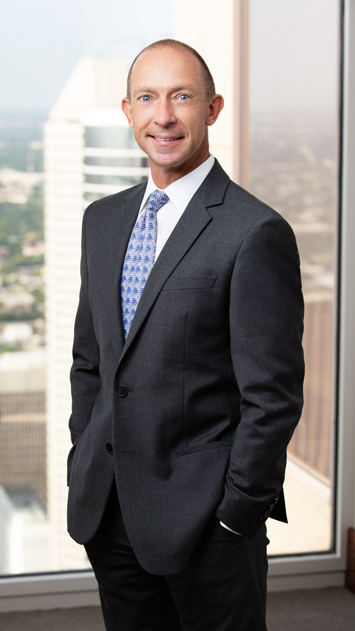 Scott Humphries’ practice exclusively involves complex commercial litigation on behalf of both plaintiffs and defendants, with an emphasis on the representation of institutional plaintiffs in securities and contract disputes.  Scott regularly represents clients nationwide in state and federal courts and U.S. and international arbitrations.

In 2010, Gibbs & Bruns was engaged by 22 of the largest institutional investors, including financial giants PIMCO, BlackRock, MetLife and others, as well as the Federal Reserve Bank of New York and the Federal Home Loan Mortgage Corporation (“Freddie Mac”), to assert claims against Countrywide and its corporate parent Bank of America relating to representation and warranty violations (“put-backs”) and mortgage servicing claims at issue in 530 Countrywide residential mortgage securitization trusts.  Our clients engaged us to enforce their rights, through the governing agreements, to compel the repurchase of ineligible mortgages that do not conform to the representations and warranties concerning the collateral in the RMBS trusts.

On June 29, 2011 we announced that the firm, on behalf of its clients, had reached an $8.5 billion settlement with Bank of America resolving all mortgage put-back and servicing claims relating to the 530 trusts.  The settlement provides not only the $8.5 billion cash payment to the trusts, but also requires Bank of America to make mortgage servicing improvements that will streamline the servicing of the 770,000 mortgages at issue in the trusts, improvements that various market sources suggest provide as much as several billion dollars of additional value to the trusts.  The settlement also requires Bank of America to cure certain mortgage document issues, and provides the 530 trusts (and consequently the investors in those trusts, including our clients), with a full indemnity for any value lost in connection with mortgages in the trusts as a result of certain mortgage documentation deficiencies.

Pacific Investment Management Company v. Residential Accredit Loans, Inc., et al.
Represented over 200 funds and clients of PIMCO in negotiations and a lawsuit against Goldman Sachs & Co. and UBS Securities involving $500 million of RALI mortgage-backed notes in which the prospectus contained an erroneous description of the credit support and principal payment sequence for the notes.

In re Fleming Companies, Inc. Securities & Derivative Litigation
Prosecuted claims by the Fleming Post-Confirmation Trust in the Eastern District of Texas against third parties involved in the collapse of grocery conglomerate Fleming Companies.