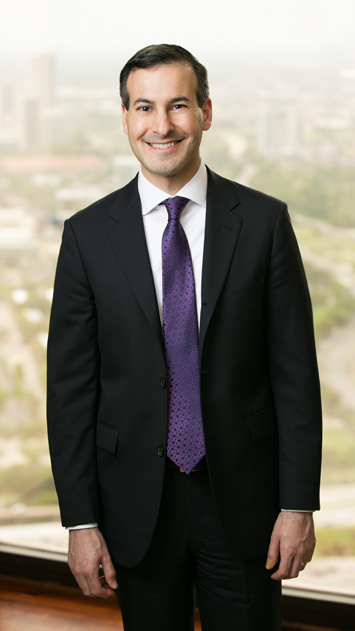 Anthony Kaim represents both plaintiffs and defendants in complex commercial disputes.  He has experience trying cases to juries in both federal and state courts and to arbitration panels.

David M. Dunwoody, Jr. v. EnVen Energy Corp. et al.
Represented David Dunwoody, co-founder and former president of EnVen, in a dispute under his employment agreement.  Mr. Dunwoody sought damages for his severance benefits package, including the value of his unvested shares, which EnVen had refused to provide for more than two years.  After a three-week trial, the jury returned its verdict finding that Mr. Dunwoody had multiple, independent grounds for contractual “Good Reason,” each entitling him to his severance benefits package, and awarded Mr. Dunwoody full damages.  In September 2021, the court entered a $12.4 million final judgment in favor of Mr. Dunwoody.

Unocal Pipeline Company v. BP Pipelines (Alaska) Inc. et al.
Represented Chevron Corporation affiliate in litigation in Houston district court against affiliates of BP p.l.c., ConocoPhillips Company, and Exxon Mobil Corporation relating to Chevron affiliate’s withdrawal from the Trans-Alaska Pipeline System.  After prevailing on appeal at the Houston Court of Appeals and succeeding in having the petition for review denied at the Texas Supreme Court, the case settled favorably for our client.

Occidental Chemical Corporation v. 21st Century Fox America, Inc., et al.
Representing Occidental Chemical Corporation in a suit filed on June 30, 2018 in which Occidental is seeking contribution from more than 100 defendants for, among other costs, the $165 million Occidental has agreed to spend to design the dredge-and-cap remedy the Environmental Protection Agency (EPA) has determined is necessary to remediate pollution in the lower 8 miles of the Passaic River.

BTEC New Albany LLC v. NRG Texas Power LLC
Brought claims on behalf of BTEC New Albany LLC (“BNA”) against NRG Texas Power LLC (“NRG”) for breach of a $110 million power-plant purchase agreement.  Under the agreement, BNA dismantled, transported to Texas, and rebuilt a gas-fired power plant, which NRG had contracted to purchase.  BNA sought declaratory judgments including that NRG was required to close under the purchase agreement and pay the contractual purchase price.  BNA also sought damages under the contract.  NRG counterclaimed and sought contractual damages.  In June 2018, and after successfully maintaining a trial setting within a year of filing suit, the case settled on favorable terms.

EF Non-Op, LLC v. BHP Billiton Petroleum Properties (N.A.), LP, et al.
Represented BHP Billiton, regarding its operation of approximately 70 wells at issue in the Eagle Ford Shale, in a dispute brought by a non-operator claiming breach of contract, gross negligence, conversion, and fraud, and seeking over $15 million in alleged damages.  BHP Billiton counterclaimed to recover millions of dollars in unpaid expenses on the joint account and sought a declaratory judgment that EF Non-Op’s failure to participate in a lease extension required it to assign its interest in certain undeveloped acreage to BHP Billiton.  The case settled favorably for our clients in January 2018.

FINRA Arbitration
Defended private equity firm in a multi-million-dollar fee dispute brought by a former placement agent.  The case was arbitrated before a FINRA panel.  After plaintiff rested its case, we moved for a directed verdict.  The case settled favorably prior to the panel ruling on our directed verdict motion.

Plains Gas Solutions, LLC v. Tennessee Gas Pipeline Company, LLC, et al.
Represented Tennessee Gas Pipeline Company, a subsidiary of Kinder Morgan, in a lawsuit filed by Plains against TGP and other defendants relating to a gas processing contract entered into by Plains and TGP and the subsequent divesture of certain offshore pipeline assets to a third company, Kinetica.  Plains alleged that Kinetica operated those pipelines in violation of the gas processing contract and sought over $100 million in damages.  Weeks before trial, the case settled on extremely favorable terms.

ERG Resources, LLC v. Nabors Global Holdings II, Limited, et al.
Represented ERG Resources, Inc. in litigation against Nabors Global Holdings II, Ltd. and Parex Resources, Inc. involving the acquisition of oil and gas properties in the Republic of Colombia.  In early 2012, ERG agreed to purchase the stock of Ramshorn International from Nabors for $45 million, which would give ERG ownership of Ramshorn’s valuable Colombian oil and gas interests.  Nabors subsequently sold the assets to Parex for $75 million.  ERG filed suit against Nabors and Ramshorn seeking specific performance and, in the alternative, damages for breach of contract.  ERG also asserted claims against Parex and its subsidiary for tortious interference with ERG’s contract.  After a two-day special appearance hearing, the trial court denied Parex’s and Ramshorn’s special appearances, but granted the special appearance of the Parex subsidiary.  The jurisdictional rulings were appealed to the Texas Supreme Court, which determined that personal jurisdiction existed over Ramshorn but not over Parex or its subsidiary.  As a result, ERG was required to pursue parallel litigation against Parex in Alberta, Canada.  In 2017, ERG’s claims against all parties were resolved prior to trial in a series of settlements totalling $35 million.

ASR 2620-2630 Fountainview, LP, et al. v. ASR 2620-2630 Fountainview GP, LLC, et al.
Defended director of a publicly-traded property management company against claims of breach of fiduciary duty and obtained a no cost dismissal of all claims against the director after filing a summary judgment motion on his behalf.  All costs of defense were recovered for our client from the company’s directors and officers liability insurance, which involved coordinating filings in a related bankruptcy proceeding to successfully dispute that the insurance proceeds were property of the bankruptcy estate.

Blue Sky Golden FPS, Ltd. v. Fulcrum Energy, LLC et al.
Represented Golden Agri-Resources Ltd. in Texas state court against counterclaims asserted in an underlying lawsuit involving one of our client’s subsidiaries.  The counterclaims sought hundreds of millions of dollars in damages based primarily on allegations that Golden Agri-Resources breached an oral contract and/or an oral partnership as well as fiduciary duties relating to a proposed joint venture to develop biofuels.  Discovery was concluded in the case, and it then settled on extremely favorable terms for our client as well as our client’s subsidiary.

Futch v. Baker Botts
Represented Baker Botts against a malpractice claim brought by a former client that alleged Baker Botts provided the U.S. government, pursuant to an investigation, information that resulted in the client later pleading guilty to criminal charges.   The client alleged breach of fiduciary duty, breach of contract, and equitable fee forfeiture claims against Baker Botts.  We obtained summary judgment on all claims at the trial court by arguing that the former client was impermissibly fracturing his claims, that his claims were barred because a felon cannot sue his attorneys for damages stemming from his conviction, and that no forfeiture claim exists where a party did not pay its own fees.  We continued to represent Baker Botts on appeal and the Fourteenth Court of Appeals affirmed summary judgment on all claims.