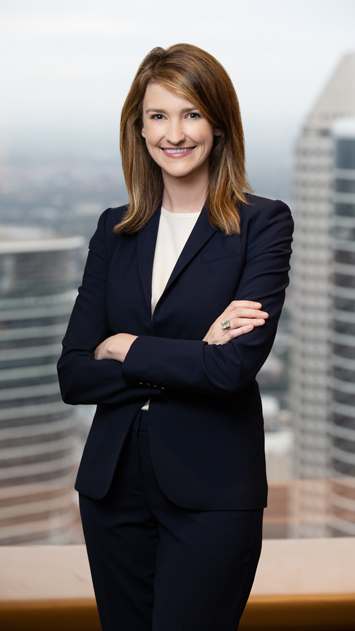 Following law school, Ashley was a law clerk to Judge Edith H. Jones, United States Court of Appeals for the Fifth Circuit from 2007 to 2008.

Ashley is featured in The Houston Lawyer’s “Women in Law” special edition, January/February 2022
“Be the Change you Want to See: Perspectives of Women Leaders in the Law”

ExxonMobil Corporation v. Lockheed Martin Corporation et al.
Represented ExxonMobil in a declaratory judgment action in the Southern District of Texas seeking relief on an alleged indemnity obligation dating back to a 1960s-vintage contract.  Lockheed and its insurer filed counterclaims for declaratory judgment and breach of contract.  We successfully moved for a more definite statement, thereby forcing the other side to concede that a key contractual instrument could not be located.  Following some abbreviated, bifurcated discovery on liability, the matter was resolved in a highly favorable manner for our client.

Odelia Abecassis, et al. v. Oscar S. Wyatt, Jr., Nucoastal Corporation, et al.
Represented El Paso Corporation, an affiliate of Kinder Morgan, in a lawsuit filed by twenty alleged U.S. nationals who claim they are victims or relatives of victims from three terrorist attacks by Hamas or the Palestinian Islamic Jihad in Israel over twelve years ago.  Plaintiffs seek to hold El Paso liable under the Anti-Terrorism Act (18 U.S.C. s. 2333) based on alleged payments of illegal surcharges to the Iraqi government under the Oil for Food Program by third parties from whom El Paso purchased Iraqi crude oil.  Plaintiffs are seeking in excess of $50 million in damages, including treble damages under the Anti-Terrorism Act.

In re Franklin Bank Corp. Securities Litigation
Represented the former Chief Financial Officer of Franklin Bank Corporation, Russell McCann, in two class action securities lawsuits that were filed following Franklin Bank’s failure and bankruptcy in 2008.  In March 2011, the court granted our client’s motion to dismiss in both lawsuits.  The ruling dismissed all of Plaintiffs’ claims with prejudice.  The United States Court of Appeals for the Fifth Circuit affirmed the dismissal, and a final judgment was entered.

SourceGas Distribution LLC v. Noble Energy, Inc.
Represented SourceGas Distribution LLC (SourceGas) against Noble Energy, Inc (Noble).  Following a complex five-week trial, a Houston jury returned a verdict for SourceGas.  The jury determined that Noble breached its Gas Purchase Agreement (GPA) with SourceGas by selling SourceGas natural gas at above-market prices that SourceGas was not obligated to purchase under the GPA.  The Honorable Patricia J. Kerrigan submitted the question of contract interpretation to the jury.  In addition to a claim for damages, the contract dispute involved tens of millions of dollars worth of impact on future performance under the contract.  On November 17, 2011, the jury determined that SourceGas’s contract interpretation was correct, found that Noble breached the GPA, and awarded damages of approximately $4.58 million.  The jury also rejected Noble’s counterclaims for breach of contract against SourceGas, under which Noble sought approximately $1.5 million in damages.  On April 24, 2012, the court entered final judgment in favor of SouceGas for over $6 million, including attorneys’ fees.

Huntsman Corporation v. Credit Suisse Securities (USA) LLC, et al.
Represented Plaintiff Huntsman against Credit Suisse and Deutsche Bank in connection with the failure to fund a $15 billion merger between Huntsman and Hexion of Columbus, Ohio.  The firm secured a $1.7 billion settlement package for Huntsman, including $632 million in cash and $1.1 billion of financing through issuances of notes and bonds on favorable terms.

Cuesta, et al. v. Ford Motor Co., et al.
Represented Class Representatives and a nationwide Class of over 500,000 individuals against Ford and WCI in a products liability class action alleging defective electronic throttle controls installed in hundreds of thousands of Ford super-duty trucks, seeking class damages exceeding $90 million.  The Class was initially certified and 2007 and re-certified in 2009 after appeals to the Oklahoma Court of Appeals and the Oklahoma Supreme Court, and after defendants’ petition for certiorari was denied by the United States Supreme Court.   The firm secured a multi-million dollar settlement in favor of the Plaintiffs in 2010.

University of Texas, J.D., with highest honors, 2007
Grand Chancellor
Order of the Coif

Recognized by Chambers USA
Up and Coming – General Commercial Litigation, 2021-2022

Recognized by Legal 500 US
Recommended in General Commercial Disputes, 2020

Listed in Best Lawyers: Ones to Watch, 2021
Commercial Litigation