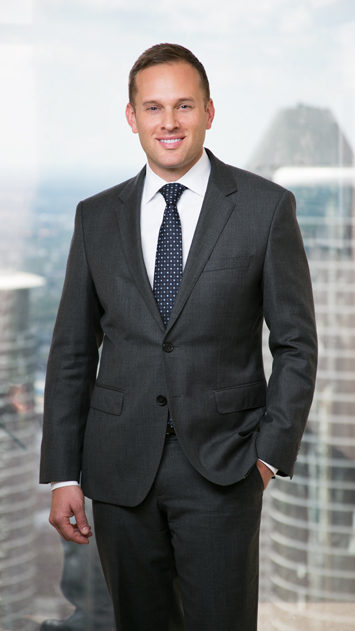 Mike served as an active-duty Armor officer in the United States Army from 1998 to 2002, attaining the rank of Captain. During that time, Mike served as an M1A1 tank platoon leader, a tank company executive officer, and a general staff officer.

Anadarko Holding Co., et al. v. NRP Trona LLC, et al.
Represented Natural Resource Partners (“NRP”) in a case brought by Anadarko arising out of NRP’s purchase of Anadarko’s 49% minority ownership share of a large soda ash mining operation in Wyoming in January 2013.  The sale agreement contained a three-year earnout provision that was to be calculated based on the operation’s revenues, up to a maximum earnout amount of $50 million.  The sale agreement also contained an anti-flip provision that provided for a buyout payment of up to $50 million to be made to Anadarko if NRP ceased to own the equity ownership interests it purchased prior to making the earnout payments.  At the request of the majority owner, NRP participated in an internal tax restructuring in July 2013 designed to simplify the ownership structure to eliminate a tax inefficiency.  Anadarko contended in its lawsuit that the internal tax restructuring triggered the anti-flip provision, obligating NRP to pay Anadarko a buyout payment of over $75 million.  The case was tried in a one-week trial starting on September 20, 2019.  During trial, the Court granted NRP’s Rule 166(g) motion on damages, reducing Anadarko’s maximum potential remedy by approximately $20 million.  Following trial, the Court rendered a final, take-nothing judgement in favor of NRP on November 20, 2019.

Apache Corporation, et al., v. Pioneer Natural Resources Company, et al.
Represented Pioneer Natural Resources in a case brought by Apache Corporation and several of its subsidiaries arising out of Apache’s purchase from Pioneer of certain oil and gas assets in Argentina.  Apache contended that an indemnity agreement in the sale contract obligated Pioneer to indemnify Apache for various claimed Apache losses totaling over $12 million and potential future losses of as much as $45 million.  Pioneer denied that any indemnity was due under the contract and disputed Apache’s interpretation of the indemnity agreement.  After taking a number of key depositions, the parties filed cross-motions for summary judgment on contract interpretation and on certain of Apache’s underlying indemnity claims.  The Court ruled in our favor on all of the summary judgment motions.  Shortly thereafter, the case settled without any payment by Pioneer.

CGBM 100, LLC, et al. v. Flowserve U.S. Inc. et al.
Represented CGBM 100, LLC. in a warranty dispute with Flowserve US, Inc. regarding mechanical pumps purchased by CGBM for use in barges designed to transport coker feed. CGBM sought damages for amounts expended to repair the allegedly faulty pumps provided by Flowserve and to obtain rental barges to cover its contractual obligations. We successfully defeated Flowserve’s pre-trial motions for summary judgment, and the case proceeded to a jury trial in federal court in Galveston in January 2017. After one week of trial, the case settled for a confidential amount.

Panda Temple Power, LLC v. Stupp Bros., Inc., et al.
Lead counsel for Third-Party Defendant Stupp Bros., Inc. in two lawsuits filed in Dallas state and federal district courts. The dispute arose out of the construction of a 14-mile high-pressure natural gas pipeline, for which Stupp supplied the majority of the steel line pipe. The construction contractor alleged that it experienced delays and additional work that entitled it to substantial additional payments, and the owner of the project filed suit against Stupp seeking to recover nearly $10 million in damages. Stupp denied the allegations and counterclaimed for recovery of its unpaid invoices. After taking early depositions of plaintiff’s witnesses to confirm that the pipe supplied by Stupp fully complied with the agreed-upon specifications, Stupp moved for summary judgment on all claims against Stupp and on Stupp’s affirmative claims for payment. While Stupp’s summary judgment was pending, the plaintiff agreed to a confidential settlement on terms very favorable to Stupp.

ERG Resources, LLC v. Nabors Global Holdings II, Limited, et al.
We represented ERG Resources, Inc. in litigation against Nabors Global Holdings II, Ltd. and Parex Resources, Inc. involving the acquisition of oil and gas properties in the Republic of Colombia. In early 2012, ERG agreed to purchase the stock of Ramshorn International from Nabors for $45 million, which would give ERG ownership of Ramshorn’s valuable Colombian oil and gas interests. During the due diligence period, ERG identified certain alleged breaches of Nabors’ representations and warranties under the purchase agreement. At the same time, Parex offered Nabors a substantially higher price for the same assets. ERG alleged that Parex had knowledge of the purchase agreement and that Nabors sought to thwart the deal in order to sell the assets to Parex instead of ERG. Nabors subsequently sold the assets to Parex for $75 million. ERG filed suit against Nabors and Ramshorn seeking specific performance and, in the alternative, damages for breach of contract. ERG also asserted claims against Parex and its subsidiary for tortious interference with ERG’s contract. After a two-day special appearance hearing, the trial court denied Parex’s and Ramshorn’s special appearances, but granted the special appearance of the Parex subsidiary. The jurisdictional rulings were appealed to the Texas Supreme Court, which determined that personal jurisdiction existed over Ramshorn but not over Parex or its subsidiary. As a result, ERG was required to pursue parallel litigation against Parex in Alberta, Canada. In 2017, ERG’s claims against all parties were resolved prior to trial in a series of settlements totaling $35 million.

Crane v. JP Morgan Chase & Co, et al.
This lawsuit arose out of the purchase by Plaintiff, an individual investor, of approximately $35 million of asset backed municipal securities from defendant JPMorgan. When the value of the securities suffered a significant drop in value, Plaintiff filed suit against JPMorgan alleging violations of the Texas Securities Act. Specifically, Plaintiff alleged that JPMorgan was selected as the underwriter and swap provider for the securities, by means of unlawful payments, which JPMorgan failed to disclose. Plaintiff alleged that, because JPMorgan had sold the securities by means of materially false statements and omissions, Plaintiff was entitled to rescission under the Texas Securities Act. On December 17, 2010, the trial court denied JPMorgan’s motions for summary judgment on Plaintiff’s claims. The case proceeded to jury trial in January 2011 in Harris County, Texas before the Honorable Mike Engelhart. Two days into trial, the parties entered into a confidential settlement which was favorable to our client.

U.S. Pipeline, Inc. v. Denbury Resources, Inc., et al.
Represented Claimant U.S. Pipeline, Inc. in an arbitration proceeding against Denbury Resources, Inc. and affiliated entities. The dispute arose out of U.S. Pipeline’s construction of a 272-mile long carbon-dioxide transmission pipeline. The construction project, initially estimated at nearly $250 million, was beset with delays and additional work, which we contended was primarily due to incomplete engineering and problems with permitting and right-of-way acquisition. U.S. Pipeline brought suit for breach of the construction contract, and sought damages in excess of $50 million. After defeating potentially dispositive summary judgment motions filed by Denbury, the case was resolved on the eve of trial on terms favorable for our client. The settlement amount is confidential.

Zachry Construction Corp. v. The Port of Houston Authority of Harris County, Texas
Secured a $23.4 million judgment for Zachry Construction against the Port of Houston Authority following a complex three-month jury trial. The breach of contract lawsuit arose from the Port’s last-minute rejection of a contractually approved construction method Zachry intended to use to build a 2000-foot wharf facility. Prior to trial, successfully defeated several summary judgment motions filed by the Port seeking to dismiss the case in its entirety. The judgment was affirmed on appeal. American Lawyer Media and Verdict Search included this jury verdict as one of the top verdicts of 2010.

Dmac Construction Corporation v. Surfside Interests, LLC et al.
Counsel for Plaintiff Dmac Construction in an arbitration arising out of Defendant’s failure to make payments in connection with our client’s construction of a $3 million marina in Surfside, Texas. Our client sought payment of monies owed under the contract and was met with counterclaims totaling over $1 million. After a week-long arbitration, the arbitrator ruled in our client’s favor.

The Interfinancial Corp. v. Simon Jacobson, in his Capacity as Executor of the Estate of Marcel Degraye, Deceased
Represented Defendant, the executor of an estate, in a suit alleging breach of fiduciary duty, fraud, and a request for an accounting by a company against its deceased founder and 50% shareholder. Plaintiff originally demanded cash and securities in excess of $100 million. By the time of trial, a number of those claims had been dropped. The case was tried to a jury in December 2007. The court granted a directed verdict in our client’s favor at the close of Plaintiff’s case.

University of Texas, J.D., 2005
Order of the Coif
Associate Editor, The Review of Litigation