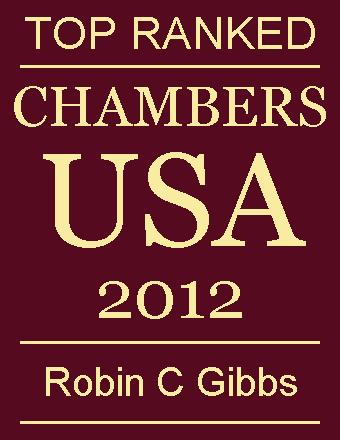 Over the past twelve months, this litigation boutique has seen unprecedented success, most notably in the form of an $8.5 billion settlement with Bank of America. Quality is woven right through the 29-lawyer bench, which comprises some of the state’s most highly regarded lawyers and which has the capacity to handle a wide array of complex commercial, energy and securities litigation and appellate work.

Sources say: “There is no substitute for hiring experts; they didn’t research the case, they either knew them or had participated in them; they knew the law, the judges, what our judge was likely to do, what local counsel to bring in – they just knew everything right off the bat. Once we engaged them, I didn’t have to be quite as worried as before.”

This is the tenth year in a row that Chambers ranked the firm on its annual short list of Leading General Commercial Litigation firms.

Robin Gibbs litigates in general commercial and energy disputes. Able to captivate a jury with his advocacy, he is cited as a notch above the rest: “He is always prepared, incredibly talented and a statesman in court.” He recently secured a $196 million judgment for Bobbitt Noel in a lengthy and highly publicized trial.

Kathy Patrick’s reputation precedes her across Texas, with sources reporting being “really blown away by her.” Lead lawyer in the spectacular $8.5 billion settlement with Bank of America, her practice extends across the commercial spectrum while including a focus on securities cases. “She is absolutely fearless, as strong as she is brilliant, and a delight to be around.”

Barrett Reasoner also covers energy and commercial litigation. “Insightful, quick and eloquent,” he earns praise for being “very good on his feet” and “a worthy adversary.” He appeared on behalf of Pioneer Natural Resources in a dispute following Hurricane Rita, and U.S. Pipeline in an industry-related dispute; both matters were settled on terms favorable to the client.