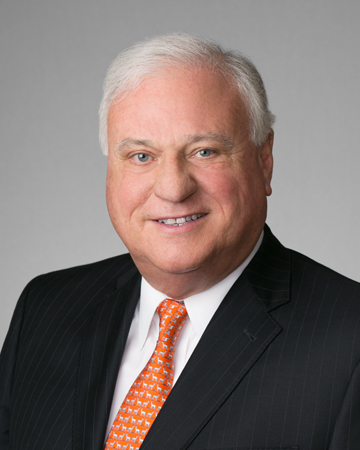 Named the “Father of the Litigation Boutique in Texas” by The Texas Lawbook, Robin Gibbs has over four decades of experience in handling high-stakes commercial litigation matters. Robin’s practice, and that of his firm, focuses exclusively on business and commercial litigation.  Gibbs & Bruns is nationally recognized as a premier litigation boutique, renowned for its signature lean trial teams and representation of both plaintiffs and defendants.  Dedicated to preserving the principles of civility and objectivity in the profession, Robin is a Fellow of the American College of Trial Lawyers, Fellow of the International Academy of Trial Lawyers, Fellow of the International Society of Barristers, Advocate of the American Board of Trial Advocates (where he served as President of the Houston Chapter), Member of The American Law Institute, President of the International Network of Boutique Law Firms – Houston Chapter, and Trustee of the Texas Supreme Court Historical Society.  Robin serves as Chair of the University of Texas Law School Foundation, and has been a Foundation Trustee since 2008.  He served on the Executive Committee of the UT Law Alumni Association, as well as President of the Texas Law Review Association.  Robin was named TEX-ABOTA Trial Lawyer of the Year in 2012.  He is the recipient of the Anti-Defamation League’s Karen H. Susman Jurisprudence Award as well as the Dean Leon Green Award from the Texas Law Review Association.

Q: What’s the most interesting trial you’ve worked on and why?

This was a breach of fiduciary duty case in the context of partnership and joint venture law in which we represented as plaintiff an airport air cargo facility developer against a major Houston-based institutional realty company for breach of a letter agreement to develop air cargo facilities at the three major New York airports: La Guardia, JFK and Newark. Against a negligible settlement offer, we obtained a jury verdict of $309 million — one of the largest commercial verdicts returned in the U.S. at the time.

Not only was the subject of the case unique, but the controlling legal principles surrounding fiduciary duties of partners and joint venturers were in their infancy in that era. We were able to put much of the plaintiff’s case on through a single defendant’s witness who we called as the plaintiff’s first witness in the case. Due to his extensive involvement in the underlying transactions, we were able to cover nearly all aspects of our liability and damages facts through him and I was later told by the jurors that the case was likely decided by the end of his testimony in a trial which lasted for an additional month beyond his testimony.

The judgment was affirmed by the court of appeals and the case settled shortly after.

Q: What’s the most unexpected or amusing thing you’ve experienced while working on a trial?

A: During a jury trial in federal court, and while cross-examining an adverse defendant witness, I came to suspect that his testimony, unusually supportive of a co-defendant, was possibly colored by some form of indemnity agreement in the witness’s favor. A few additional questions confirmed the witness had indeed obtained such an agreement. The court promptly ordered the agreement produced overnight. Interestingly, and consistent with the testimony given on the stand, the indemnity agreement provided the witness with a $50,000 personal loan conditioned on his providing certain answers set forth in a written Q&A attached to the loan and indemnity agreement. All this was promptly revealed to the jury which returned a verdict for $84 million against the defendants.

Q: What does your trial prep routine consist of?

A: One month before trial:

1) read all significant fact and expert witness depositions;
2) read and mark up hard copies of all exhibits which I expect may possibly be admitted in evidence; and prepare much of the expected examination based on the document details; and
3) further simplify the case storyline so it can seamlessly be described/used both in voir dire and in the immediately following opening statement and, whenever possible, be prepared to cover the same ground a third time in examination of the initial witness to hit the stand.

Q: If you could give just one piece of advice to a lawyer on the eve of their first trial, what would it be?

A: Regard the butterflies in your stomach as an ally — a positive incentive for your pretrial preparation and clear thinking — not as an indication of fear based on lack of experience or preparation.

Q: Name a trial attorney, outside your own firm, who has impressed you and tell us why.

A: There are two such trial lawyers, both from the generation before mine: Pat Maloney of San Antonio and Joe Jamail of Houston. Both were fearless lawyers who loved jury trials above all else in the practice of law. Both were ex-Marines who fought in the Pacific, widely-read, and were lawyers who fully understood all relevant aspects of the human condition in their respective law practices — traits which likely accounted for their extraordinary successes in the courtroom.