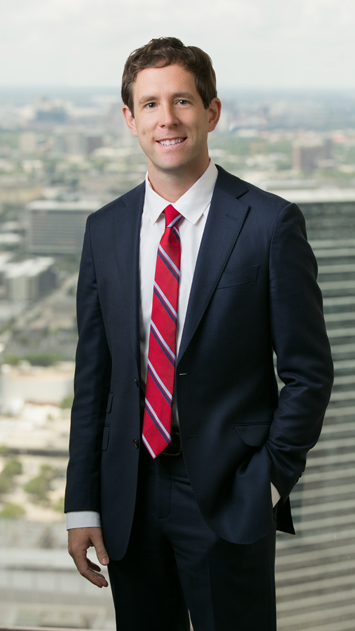 Colin has crafted a true generalist trial practice at Gibbs & Bruns. Representing both plaintiffs and defendants, Colin has gone to trial and spearheaded cases – large and small – in the areas of oil and gas, energy and environmental regulations, financial fraud, breach of fiduciary duty, real estate, commercial contract disputes, mass tort, entertainer contracts, trade secrets, malicious use of force, and more. Whether it is a high-stakes, high-dollar case or a small case that simply matters to his client – Colin is known for approaching every matter with initiative and a can-do attitude.

Colin’s efforts have been recognized by his colleagues, peers, and clients in a variety of legal publications including Legal 500 – recommended in Oil & Gas Litigation (2019), and in Thomson Reuters’ “Texas Rising Stars” (2018-2020).

“Developing an ‘un-specialized’ trial practice and a commitment to community engagement didn’t happen by accident – it’s a product of how I was raised. Growing up in Urbandale, Iowa, working hard and being well-rounded were ways of life. My dad, a litigator and city councilman, coached both my soccer and mock trial teams and modeled a strong work ethic. My mom, a former teacher, ensured education was the top priority and encouraged me to be active in the community and to pursue my passions for music and sports. I carried these values to The University of Notre Dame, where I graduated magna cum laude with a degree in political science and a minor in philosophy, politics, and economics, and participated in student council, vocal performance, and (for a shorter stint) the track team.”

Following graduation from Notre Dame, Colin joined Teach for America.  He was placed in Houston and taught 5th Grade at an HISD elementary school, where he also served as co-chair of the school’s newly formed running club. As a second-year teacher, Colin was the “Content Leader” for other TFA Houston 5th Grade teachers and became a “Corps Member Advisor” helping incoming teachers prepare for the school year.

“Whatever impact I had on my students and school those two years pales in comparison to what I learned from them and the meaningful impact they had on me.”

After two years of teaching, Colin entered the University of Texas School of Law. As a first-year law student, Colin and a friend won the school-wide mock trial competition. He later served as an Articles Editor of the Texas Law Review. After graduating law school with honors, Colin returned to Houston, where he served as law clerk to The Honorable Sim Lake, United States District Judge for the Southern District of Texas.

“No amount of law school or CLE can beat watching someone like Judge Lake, day in and day out, demonstrate what it means to take your job seriously and to do things the right way.”

Occidental Energy Marketing, Inc., et al. v. NuStar Logistics, LP
Represented Occidental Energy Marketing, Inc. and Oxy Ingleside LPG Pipeline, LLC in a lawsuit against NuStar that centered on a pipeline refurbishment and reversal project and, after NuStar’s propane line ruptured, the integrity management of the pipeline. The dispute arose post-rupture when Oxy terminated the take-or-pay and related contracts with NuStar. Tried case to the bench for several weeks. Case settled after trial.

Goldking Onshore Operating, LLC et al. v. Leonard C. Tallerine, Jr., et al.
Represents Goldking Onshore Operating, LLC and Goldking Holdings, LLC in their lawsuit against the companies’ former President and CEO, Leonard C. Tallerine, Jr., for corporate embezzlement.  Plaintiffs allege that Tallerine engaged in a calculated and pervasive scheme to steal at least $700,000 out of the companies’ operating accounts for his personal financial gain and use by, among other things, wiring company funds directly to his personal bank account or the accounts of entities he owns, directing the company to pay his personal expenses, submitting fake and doctored invoices to the company for payment to himself of his affiliates, and stealing checks payable to the company and depositing them in accounts of entities he owns.  Based on this conduct, Plaintiffs have asserted claims against Tallerine and those that assisted in the embezzlement for conversion, violations of the Texas Theft Liability Act, fraud, unjust enrichment, breach of contract, breach of the duty of good faith and fair dealing and conspiracy.  Case settled prior to trial.

Scott Martin, et al v. Martin Resource Management Corp., et al.
Represented Keeneland Capital Management, LLC (“KCM”) in a shareholder derivative and individual suit involving its investment in Martin Resources Management Corporation (“MRMC”), a closely-held energy corporation in the business of transportation, storage, terminalling and processing of energy resources.  KCM purchased a significant number of shares in MRMC from a key stakeholder, and was assigned that seller’s causes of action against members of management and the Board of Directors for, among other claims, shareholder oppression, breach of fiduciary duty, wrongful entrenchment and dilution, abuse of control, gross mismanagement and fraud stemming from the Directors’ alleged improper issuance of well over $50 million of MRMC stock for the purpose of entrenching management and diluting certain minority shareholders.  MRMC and the MRMC Employee Stock Ownership Trust also opposed KCM in this action, and, along with the other defendants, asserted counterclaims for over $20 million in alleged damages against all plaintiffs and other third parties.  After two years of intense litigation that involved several other related lawsuits, the case settled favorably for KCM for a confidential amount on October 2, 2012.

Venture Capital Firm Representation
Represented a venture capital firm and one of its managing partners in a dispute between two cell-tower companies involving claims for unfair competition, business disparagement, tortious interference, breach of contract, and Lanham Act and anti-trust violations.

Vocal Entertainer Representation
Represented a well-known vocal entertainer and songwriter in defense of a lawsuit brought in federal court by his former record label that included claims for breach of contract and copyright and trademark infringement.  The trial court granted our client’s motion to dismiss.

Pro Bono Representations
Through the firm’s affiliation with the Houston Volunteer Lawyers program represented clients on a pro bono basis in a variety of matters including family disputes and student-loan assistance.

Represented a low-income family pro bono in defense of a neighborhood public-nuisance lawsuit, which ultimately resulted in a favorable, non-monetary settlement agreement.

University of Texas, J.D., with honors, 2010
Order of the Coif
The Order of Barristers
Articles Editor, Texas Law Review

Teach for America – Houston, Board of Directors