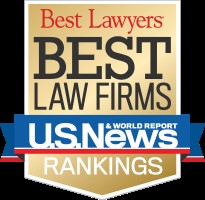 The list is the inaugural combined effort by both media groups and includes 30,322 rankings of 8,782 law firms in 81 practice areas.